The trip to Kansas City was the final stop to complete the baseball part of the trip. There, we went to the Negro Leagues Hall of Fame and Museum. As we approached Kansas City, I also remembered that barbecue (real barbecue) was a bit of specialty in Kansas City, and we decided to put it to the ‘Pepsi challenge’ with Texas barbecue.

It just so happened that Arthur Bryant’s, a world famous barbecue joint, was four blocks from the museum, so I said bring it on … and they brought it. Not only did they give us a ridiculous amount of food – the sandwich I got had enough brisket for three meals -but the food was delicious. Put simply, it was spectacular and melted in our mouths.  We also had cole slaw, baked beans, and French fries. Also in insane quantities. The one point of displeasure was with the sauce. I have long believed that truly good barbecue, doesn’t require sauce, and they put a lot of sauce on their meat. However, I did have some that escaped the deluge of sauce and it held its own against Texas barbecue. Since I get barbecue of that quality so infrequently, it was heavenly. 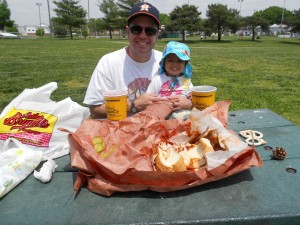 The Negro Leagues Hall of Fame and Museum was incredible. It had examples of how professional baseball has flourished outside of Major League Baseball. It also showed how the Negro League was just as much of a cultural icon of the black community as the MLB had been for the white community. In addition, the Negro Leagues had some of the best players to ever play the game. The main room was an incredible site. It had life-size bronze statues of the most renowned players at their position and art by Kadir Nelson. Unfortunately, we had the camera settings all wrong for the lighting, so not many pictures came out. 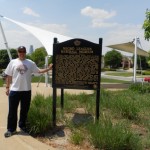 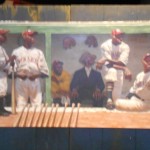 Artist Kadir Nelson was prominently displayed in the museum. 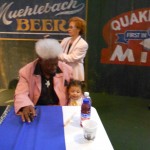 Cora working a hug from a player from the Negro Leagues. 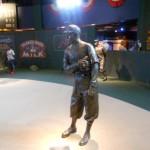 The main area of the museum.

In addition, we happened to visit during an event with several former Negro League players there to tell stories and sign autographs. I managed to get all of their autographs across two Negro League Museum baseballs. A bulk of the former players were from the Kansas City Monarchs. I will update this post when I get the names straightened out. A great visit, and I only wish we had more time to go through all the information on display.