We elected to spend 4 nights at our first stop in order to give ourselves a chance to adjust to the east coast time zone, see the sights and visit family. While we know the kids won’t remember this trip outside of the pictures, Sean in particular has a passion for our nation’s history and there is plenty of it in Washington D.C. The story will mostly be told in pictures but some highlights not pictured from our activities include:

We managed to pack in more activities than we thought we could with two little ones in tow. Some of that is definitely due to feeding the baby on the go and a steady supply of snacks for big sister. Maybe on my personal blog I’ll share some of the revelations and tribulations of traveling with small children as I have learned them.

Wireless access on the road being what it is, I will have to add pictures later, but more posts will be coming sooner.

We took our time getting up and had breakfast in thanks to the hospitality of my sister. We strolled to the National Mall to take a look around and see what it was like with Cora in the borrowed stroller (thanks Tara and Henry!). Harlan was in the ergo baby carrier (also a recent addition to our travel gear) and that had its ups and downs and well. Cora only scraped her knee once and stayed dry all day. We had lunch with Sean’s cousin at a Texas-themed Mexican restaurant called Austin’s (pretty close to Tex-Mex) and checked out the Constitution and the Declaration of Independence at the National Archives. Unfortunately, we’d reached the end of Cora’s goodwill with our excursion and headed back to the condo for naps. Sean dipped into the Air and Space Museum solo while they napped. For the evening we ventured over to Busboys and Poets in the Vista neighborhood and then went home for bed.

We visited the 9/11 memorial at the Pentagon. It was beautiful and well done. Cora didn’t quite get how to be behave at a memorial (and she couldn’t read the signs asking for quiet). It was the first of the 9/11 memorials on our trip and it gave us pause for the weeks ahead, seeing parts of the country touched by that unforgettable event. 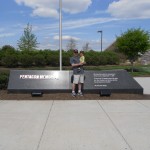 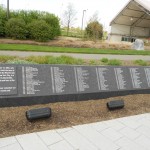 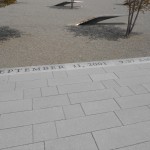 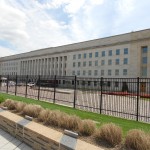 Side of the pentagon hit by AA Flight 77 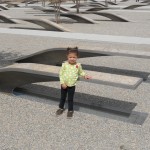 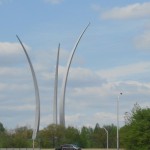 Air Force Memorial near the Pentagon.

We visited the mall after nap time to ride the carousel and eat funnel cake (don’t do it!). That evening, my sister watched the kids for us and Sean and I went for adults only dinner and drinks. We’re a little outside the age range for the location we picked but either way it was nice to spend some QT together. 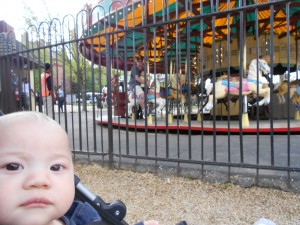 Harlan – Why don’t I get to ride with them? 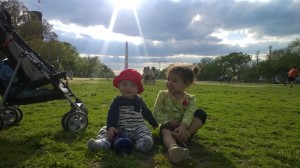 Shining children on the National Mall

We were hosted for brunch by Winston, Eden, Maezie and Nina. A fabulous time was had by all, especially two little girls and a yellow slide. If you ever want to go to Honduras to help with Winston’s clinic, give him a buzz. It sounds like an amazing opportunity for outreach work. Then we continued the trek to the Air and Space Museum Extension at Dulles to see the Discovery Space Shuttle. We met up with Brandy, a good friend from Rice and one of my gorgeous bridesmaids and her family at this stop. We had lots of baby/kid time and let the menfolk geek out over aircraft and engines, the drive was worth it! That evening was dinner in and packing for the road to Gettysburg. 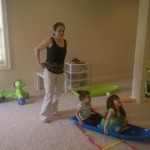 Hanging with the good Dr’s Winston and Eden and Dr. to be, Maizie. 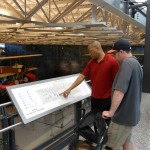 Charles laying some knowledge on Sean at the National Air and Space Museum – Udvar-Hazy Center. 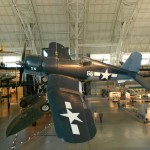 Prop fighters with the stealth bomber in the background. 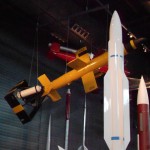 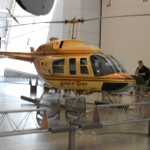 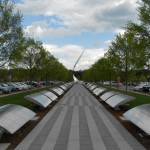 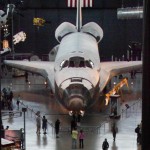 What we came to see, the Discovery Shuttle. 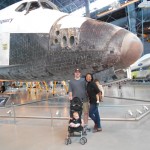 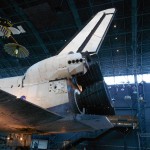 Rockets! But on the shuttle!

It was our first travel day for the trip and we thought we should get an early start. We realized our stay wouldn’t be complete without visiting the Lincoln Memorial and the Reflection Pool, however. We packed up the condo and planned to grab a late brunch (isn’t that just lunch?) with my sister after making a stop. We stopped at the Lincoln Memorial first and took it all in (reflection pool, World War II Memorial  all the ducks) and walked back along the other memorials to our far flung parking spot. Turns out that was no minor trip, and after having lunch at the the Eastern Market on a gorgeous day, we finally got on our way to Gettysburg, PA. 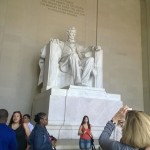 My first time to see the Lincoln Memorial up close. 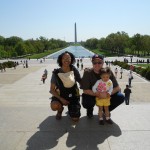 We really were there. 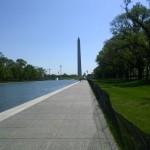 Washington Monument from the Reflection Pool.